It's been a hot minute since I've done a round-up of recs from a specific fest, but I followed this year's

hd_fan_fan pretty closely and read a number of really lovely fics! There were over 60 fanworks in the fest this year O_O and you can check out the masterlist here if you'd like to check out the other creations! I managed to read about 2/3 of the entries, and my favorites are below! 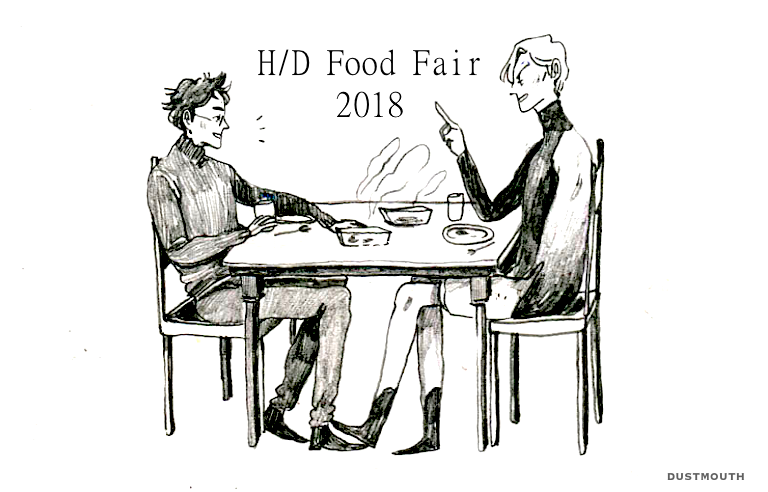 hd_fan_fair Food Fair 2018
Summary: Draco had been trying to beat the sunset, walking along the cobblestone road to the Chateau where he would be staying that night, when he saw the door. Le Billet Doux, said a painted red sign. Below it, réservations non requises: ‘no reservations required.’
Really lovely fic with an older Harry and Draco running into one another at a restaurant in France and reconnecting over a meal. The author does a brilliant job of effectively and immediately immersing us in this moment, and the sense of atmosphere and the connection between Harry and Draco is just gorgeous. Definitely worth a read!

Title: The Way These Days Seem to Go (And Go)
Author:

hd_fan_fair Food Fair 2018
Summary: Stress baking isn’t a hobby Harry ever thought he’d pick up, but he’s surprised to find how much it helps him to get through those long months post-war. It keeps his hands busy, it keeps his mind occupied, and when Draco Malfoy steadily pushes his way back into Harry's life, it helps with that too.
This fic was curling up on a comfy sofa with cup of hot tea and a delicious scone on a drizzly day. It was lovely and warm and wonderfully written. The characterizations were fantastic, the relationships between all of the characters here were perfection, and the build between Draco and Harry was a delight. Plus, as somebody who's dabbled in baking as a coping mechanism, Harry as a stress baker and all of his adventures were SO relatable!

Title: Let him lead me to the banquet
Author:

hd_fan_fair Food Fair 2018
Summary: The worst part is Harry’s got no idea why Malfoy keeps sending him invites. He’s never replied to a single one. And if the whole dinner is as exclusive and sought-after as the Prophet keeps breathlessly reporting, then presumably the only reason Malfoy wants him there is in his capacity as the Chosen One. So, really, he can fuck right off. Harry doesn’t care about Draco Malfoy’s redemption tour. And he’s certainly not going to help him with it.
Honestly, this fic was SUCH a delight! The characterizations were spot-on, I adored the interactions between every single character, and the growth here was just lovely to read.

hd_fan_fair Food Fair 2018
Summary: Luna and Ginny are worried about Harry, Greg is a very fine baker, Snape's portrait has a lot of opinions and Draco Malfoy is (probably) up to something. In which one man's love for a jam tart blossoms into a different kind of love entirely.
This fic was such a wonderful read. I'm generally not one for a non-linear timelines, but it was used really effectively here and the flashbacks were brilliantly chose to compliment the present day narrative. The characterizations were really lovely, and it was wonderful watching Harry and Draco come together, this time for good! And the art! The art is gorgeous and pairs perfectly with this lovely fic! :D

Title: A Holiday in Provence
Author:

hd_fan_fair 2018
Summary: Harry Potter is turning 50 years old and feeling lonelier than ever. Divorced, retired, and learning he’s not quite as straight as he thought he was, Harry reluctantly accepts a birthday gift from his friends for a week’s stay at an idyllic French vineyard. Too bad Hermione and Ron neglected to mention that the owner of the winery happens to be a certain quick-witted blond Slytherin…
Really wonderful fic with an older Harry going to a vineyard to attempt to relax and, of course, the vineyard is owned by Draco! I really enjoyed Harry's voice here and the build between Harry and Draco was perfect. They were both older and had clearly matured, and it was really wonderful seeing them come together. Plus, SUPER hot and a lovely ending! :D

Title: Ynys Afallach (I Will Give My Love An Apple)
Author:

hd_fan_fair 2018
Summary: Professor Waverley Root's tutorial in the history of magical food is something of a legend at Flamel College. Draco Malfoy wants to apply it to his work in sustainable wizarding agriculture. Harry Potter's taking it for his interest in historical overlap between the magical and Muggle worlds in the West Country. When Root pairs them together, the fireworks (and the apples!) fly. Now if only they can find something original, perhaps they'll make it through to complete their degrees on time.
Really clever and wonderful fic with Draco, Harry, and several others at magical University, where Harry and Draco have to work together on a project. Everybody was really beautifully captured here, and all the interactions were fantastic. Fascinating story, and so much glorious pining on Draco's part with a wonderfully satisfying resolution.