Now that reveals have posted over at

hd-erised, I thought I'd take a quick moment and rec some of my favorites from the fest! There were a ton of really great submissions this year, so I'd HIGHLY recommend checking out the full masterlist, as the below fcs are just a small sampling of the fics that were more to my own personal & subjective tastes. We were also SUPER spoiled for art this year, and I could seriously rec every single piece, so I very much suggest heading over at gazing at all the lovely, especially if you're shorter on time and don't have a moment to read. And, of course, please do leave some love for the creators if you enjoyed their work! <3 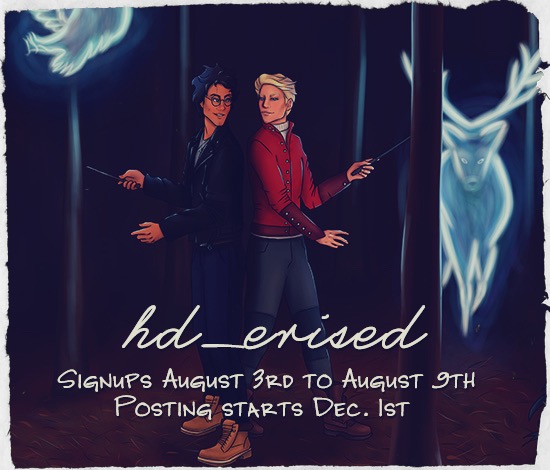 Title: with exactness grinds he all
Author:

hd-erised 2018
Summary: Harry has known the forest, and now he knows Draco.
This fic is just gorgeous! The writing is beautiful and lyrical and captivating, and there were so many lines that hit me right in the feels. One of those fics that feels so much longer than it is, not becausde it dragged, but because there was just so much richness, it's amazing that it manages to fit in less than 10k.

Title: It's Not a Passing Fascination
Author:

hd-erised 2018
Summary: One of Harry's favourite things is watching Malfoy work.
Oh, this fic is such a delight! It's got awesome banter, some lovely bits of magical theory, competent tattooed Draco, and a Harry who's totally smitten. Plus, seriously hot switching sex! \o/

Title: Sex and the Art of Castle Maintenance
Author:

hd-erised 2018
Summary: "Come on, boys," Zabini drawled. "You’re only delaying the inevitable."
Trouble always had a way of finding Harry, and eighth year was obviously going to be no exception.
Super wonderful read! Harry's voice here was brilliant, and sharp, prickly Draco was lovely and heart-breaking in his post-war angst. I thought the dynamic between them was really fantastic, and the whole thing was also hot as hell. :)

hd-erised 2018
Summary: Draco Malfoy is still a puzzle that Harry Potter wants to solve. Good thing they both solve puzzles for a living.
Such a fun read! I really enjoyed the different careers for Harry and Draco here, and the background cameos were lovely. The plot was engaging and I really liked seeing Harry and Draco dance around each other and come together. :D

hd-erised 2018
Summary: Harry is perfectly content being single, heterosexual and living in Godric's Hollow with his very clingy rescue dog, Snitch. When Draco Malfoy turns up on Harry's doorstep demanding that Harry teach him how to drive, things quickly become a lot more complicated.
This fic was a delight! Harry's voice here was brilliant, and the banter between him and Draco was A+. I loved Harry's realization about his sexuality, and the connection between him and Draco here was really fantastic.

hd-erised 2018
Summary: Draco is in trouble; to get out of it he needs to seduce Harry Potter.
This fic was fantastic! Such a cool take on the creature!fic trope with Incubus Draco. The writing was exquisite and the sexual chemistry here was seriously off the charts. I loved how this developed, and the ending was fantastically satisfying.

Title: Of Wands and Trees
Author:

hd-erised 2018
Summary: All Draco wants to do is be a wandmaker, but to do so he needs to understand the soul of trees. Of course, the only man who might be able to help him is the one man who is more of a mystery to him than any tree.
Wonderful fic with Draco as an apprentice wandmaker who goes off to the woods so he can learn how to commune with trees. Of course, he ends up unexpectedly turning to Harry Potter to help him do it, and the slow build between them is really lovely. The nature setting here was so lush and beautiful, and if you're a lover of trees, there is certainly no shortage of them in this fic! I really enjoyed the characterizations here, and how Harry and Draco are able to grow and heal and forge something strong and real.

hd-erised 2018
Summary: Harry Potter left Britain after the war and didn’t look back. Ten years later, when Gringotts discovers a vault containing his parents’ belongings—including their badly spell-damaged wedding rings—he’s forced to face up to friends and family who’ve grown in ways he could never imagine, a wizarding London rebuilt beyond his expectations, and the anniversary of the Battle of Hogwarts. And if that wasn’t enough, there’s the entirely unforeseen problem of Draco Malfoy.
Featuring pureblood wizarding traditions, ancestral magic, open mic nights, marriage equality, a diner in Brooklyn, and the return of Fleamont Potter.
OH, this fic was just wonderful! The Harry here mostly "dealt" with his war trauma by running away, and when he comes back to England, he slowly starts to realise how much the world and people he's left behind have changed. Draco here was AMAZING, as were all of the characters, really, and the whole fic was smart and sharp and captivating. Gorgeous build, ALL the feels, and a wonderful ending.

Title: For Thine Is The Kingdom
Author:

hd-erised 2018
Summary: On a secret mission, Draco is Turned. With no memory of what happened, he learns that to save his missing Auror partner and regain what he’s lost, he must uncover the long-buried secrets of the vampire covens. To do that, Draco must open his mind and heart to what he has become, the new-found family that surrounds him, and the man who has remained steadfast at his side through it all.
Harry has spent the last five years avoiding the man he fell in love with, but when Draco needs his help, Harry cannot refuse. As they race against the clock to find Draco’s missing partner, Harry discovers that the the bond they share is nothing to hide from, and that he'll never outrun the pace of his own heart.
Oh boy, was this fic ever fantastic! Seriously gorgeous and gripping fic with newly-turned Vampire Draco who's got a missing Auror partner and missing memories. The plot was fascinating and perfectly paced, and the relationship build between Harry and Draco was super brilliant. The kind of fic that kept me on the edge of my seat, desperate to find out what happened next. Plus, some mind-meltingly hot sex, fabulous supporting characters, and a lovely, brilliant ending.

hd-erised 2018
Summary: When Draco shows up as a suspect in a murder case after eight years of no contact, Harry has to balance his professional life and his past friendship with Draco. As suspicion mounts against him, Harry knows he has to keep his distance, but Draco makes that difficult when he starts claiming that they have a Life Debt to settle. Harry wants to trust him, but what is he hiding and where has he been these long years?
This fic is so freaking good! It's definitely a slow burn, but the kind that keeps you on the edge o your seat, desperate to keep reading to see how it unfolds. The case aspects are really well done, and are woven into the relationship aspects so perfectly that neither feels like it overpowers the other. There's definitely some darker content here, but I'd really urge you not to be scared off by the warnings, as everything is handled really skillfully and the ending is really lovely. And OMG y'all, the art here is phenomenal and just unreal. There is SO much of it and the scenes illustrated complement the writing beautifully. Definitely a gripping and captivating read that I highly recommend!

hd-erised 2018
Summary: Two years after the war, and Harry’s content with his life. OK, so it’s a little annoying that he keeps winning Witch Weekly’s Most Eligible Bachelor award, and he’s not looking forward to the unveiling of an enormous gold statue of himself, but he loves his friends, and he loves being an Auror. And if he yearns for something more, something he can barely bring himself to think about, well, he’ll probably get over it. No one’s happy all the time, are they?
But then everything changes, and Harry’s thrown into a new and dazzling world he’s not sure he can actually escape from. And as time goes on, he starts to wonder: does he actually want to?
This fic was SO good!! Harry's voice was brilliant here, and the alternate universe he and Draco get themselves stuck in was super fascinating. I loved seeing the Muggle versions of the various characters, and the relationship build between Draco and Harry here was fantastic. I really loved how the past wasn't glossed over and things were difficult at complicated between them, but so very real. The sex was smoking hot, and I thought the resolution was super satisfying. Loved!!