Reveals just went up over at

hd_erised so I figured I'd do a round-up of some of my favorite fics! There were a ton of wonderful submissions this year, so I highly recommend y'all check out the masterlists, as your favorites might be different from mine! <3 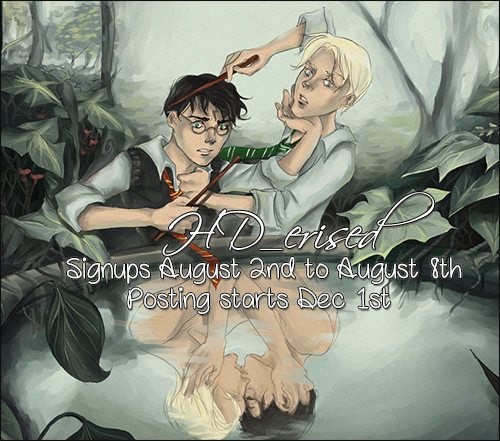 hd_erised​ 2019
Summary: Every kingdom needs a prince. Every prince needs a good and useful knight. Draco and Harry play their parts and renegotiate some borders while they’re at it.
Truly gorgeous royalty AU, with some beautiful prose, a lovely build, and a fabulous connection between Harry and Draco!

Title: Happily Ever After … Or Something.
Author:

hd_erised​ 2019
Summary: At a loss for what to do in the aftermath of the war, Harry takes a job a Flourish and Blotts for its new owner, Narcissa Malfoy. Little does he realise this means he will be working directly under Draco Malfoy and his unique brand of management. Harry also doesn’t realise he’ll be dealing with a series of passive-aggressive (and boobytrapped) letters and, worst of all, a mysteriously ill Draco. Perhaps Luna has the answers? Well, she might but she’s too busy trying to find a book. It has a blue cover, that’s all she remembers…
SUCH a charming and delightful read! The writing was wonderful, and the whole concept was just a delight and masterfully done. Guaranteed to leave you with a smile on your face!

Title: Burn the Curtains and the Wine
Author:

hd_erised​ 2019
Summary: There are two versions of Harry Potter: the wizard who is the Ministry of Magic's most dangerous and successful assassin, and the husband who leads a staid life of domesticity with a reformed Death Eater. And never the twain shall meet.
Until, one day, they do.
I love me a good Mr & Mrs Smith Fusion, and this one was so much fun! The concept worked so well with Harry and Draco, and the tension (and smut!) was absolutely fantastic. Plus some truly A++ action scenes! Definitely a fun read! :D

Title: Midnight in the City of a Hundred Spires
Author:

hd_erised​ 2019
Summary: Harry Potter is a missing person. Draco Malfoy is a vampire. They are the last two people one would expect to bump into each other in a Creature Bar in Prague, yet to Draco’s absolute shock that is definitely Harry fucking Potter sitting across from him.
Even more surprising is that Potter may have a case for him.
I'm always here for Vampire!Draco, and this fic was just wonderful! Draco's POV was fabulous, the mystery aspect had me on the edge of my seat, and I really loved the connection between Harry and Draco here!

hd_erised​ 2019
Summary: Draco’s position with the International Association of Quidditch has always been tenuous, but that may be about to change with Harry as his source on the biggest case of Performance-Enhancing Potions doping of the decade. But Draco soon learns that things are not as they seem, and he has to find a balance between his commitment to the IAQ and his evolving relationship with Harry, as they uncover secrets that even Harry has fought to keep.
I do love me some Quidditch!fic and this was another interesting take on the trope! Draco's POV was really wonderful, and the connection between him and Harry, and the way their relationship evolves, was just fabulous.

hd_erised​ 2019
Summary: Harry Potter, Head Coach of the Appleby Arrows, is very content leading a quiet life. He has a doddery old house-elf who makes his breakfast, a team of players who love Quidditch almost as much as he does, and a Kneazle that curls against his damaged leg at the foot of his bed at night. The absolute last thing he needs is a fit, tattooed, and wildly talented Draco Malfoy back from living his life on the margins. Soon he’s dealing with goblins for the first time since the war, traveling to Prague, eating dodgy squid, and maybe, just maybe, accepting that Quidditch, Malfoy, and even Harry himself are still capable of change.
Oh gosh, this was SUCH a fascinating fic! I love me a Quidditch!Fic and this was a truly unique take on the trope. Draco here is the stuff wet dreams are made of, and the build between him and Harry was such a delight to read. Really engaging fic!

Title: you, a violent desire
Author:

hd_erised​ 2019
Summary: The Amortentia was an accident—but only the first time.
Ooo, this fic was so good! Such an interesting concept, the way the Amoretentia is used, and I really just loved the characterizations so much! The relationship between Harry and Draco here is so gritty and real and volatile, and the evolution of feels and emotion here was really well done! Plus, UNFFF the smut was crazy hot!

Title: Darkest Before the Dawn
Author:

hd_erised​ 2019
Summary: The last thing Draco wanted was to show up at Harry Potter's door, cursed blind and holding a boxful of his friends Transfigured into snakes, but here he was.
Between breaking the curse, adjusting to life without sight, and teaching his Defence Against the Dark Arts classes, Draco's got his hands full. Being forced to live with Harry Potter might just be the death of him.
This is a story about the bonds of friendship, fairy tale endings, and learning to ask for help (even from Gryffindors).
This fic was SUCH a gripping read! All of the characters were wonderfully real and fleshed out, and I really adored how very set in the magical universe this fic felt! Draco's voice was brilliant, and the curse here was really well captured. I loved the tension and build between Draco and Harry, and the ending was just perfect!

Title: The Beauty of Thestrals and Other Unseen Things
Author:

hd_erised​ 2019
Summary: Harry is content. He has brilliant friends and his job as Head Auror keeps him busy. When Draco Malfoy is arrested for gross indecency, Harry’s comfortable life begins to unravel. He’s forced to decide if it’s worth risking everything for love in a world where following his heart is a criminal offence.
This fic is SO fucking good! Don't let the tags scare you--there's some heavy content here, but it's handled with such a deft, brilliant hand, and even through the darkness there's such joy and hope. The characters here, background included, were so beautifully captured, and I just loved all the relationships. The build between Harry and Draco was truly wonderful, and holy cow, was the smut SMOKING hot. A seriously beautiful read, with a wonderfully satisfying ending.

Title: The Promise of Summer
Author:

hd_erised​ 2019
Summary: How was Harry supposed to know that coming back for eighth- year would be so confusing? Everything is the same, and yet not the same. And nowhere is this more obvious than with Draco Malfoy. Harry finds himself once more watching and following Malfoy, trying to work him out. When they are drawn together to heal the castle, Harry doesn’t just find Malfoy—he also finds himself.
Such a wonderful 8th year fic! The slow build here was lovely, and I really appreciated the care the author gave to the headspace the characters might be in so soon after the war.