Reveals posted on Friday over at

hd_erised and I thought I'd post a couple of my most favorite fics in the fest in case anybody is looking for a place to start! I made myself stick to just 10 recs, but it was hard to choose as there were SO many amazing fics and works of art for the fest this year! Please do check out the masterlist for more goodies, and don't forget to leave the authors and artists some love if you enjoy their work! <3 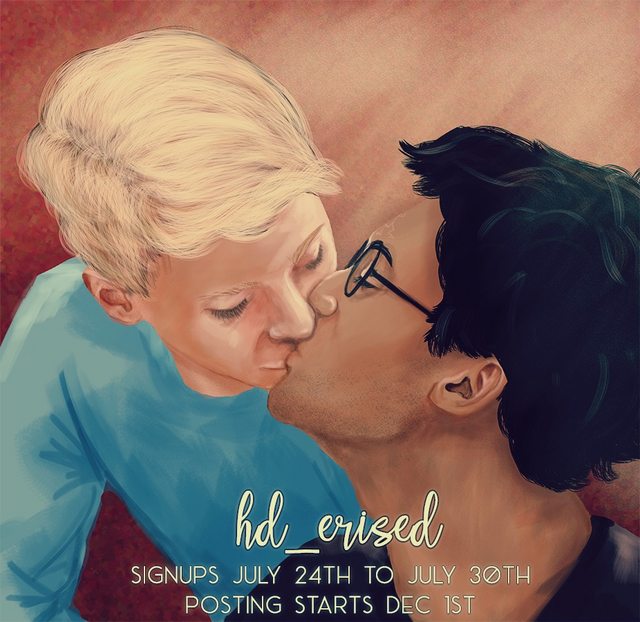 hd_erised 2020
Summary: With the wizarding world on lockdown due to a magic-draining pandemic, Harry is stuck in Grimmauld Place, bored and alone—until the ghost of Draco Malfoy shows up to haunt him.
OMG, this was incredible! I'll admit, I've not been reading too many pandemic-related fics lately, just because I feel like it can be such a tricky thing to get right given the current climate, but the author absolutely nailed this one. The writing here was phenomenal--so many lines absolutely took my breath away, and I was desperately reading on to figure out what was going on. The build between Draco and Harry was pitch-perfect, and I'm just blown away by the fact that this is less than 10k because this is really such a rich, full world here that it reads like a much longer fic. The ending was perfection, and I just really, really loved this one!

hd_erised 2020
Summary: Harry’s wand is dying and Draco’s flirtation with a magical matchmaking service is causing him no end of trouble. When Harry turns up at Draco’s shop looking for help, everything gets a lot more complicated.
Eee, I loved this so much!! Draco's voice was brilliant and I really enjoyed the build between him and Harry. I'm not generally one for matchmaking type fics, but I thought the concept was so clever here, and I loved the little magical details throughout! The smut was SUPER hot, and the ending was just lovely. Really such a fun, sexy, heart-warming read!

hd_erised 2020
Summary: Harry, along with the rest of the Puddlemere United team, is determined that this year will be the year they finally win the Quidditch League Cup. But when a Bludger-induced fall leads to a missed Snitch, broken bones, and an extended stay in St Mungo's, that conviction is put to the test. If Harry wants to have any chance of returning to the pitch this season he has to put all of his faith in his assigned Healer. Which is no easy task when that Healer is Draco Malfoy.
I so, SO enjoyed this fic!! The build here was wonderful and I really enjoyed seeing this older Draco who's clearly learned and grown. The way the initial animosity turns into grudging respect, then friendship, then more was really wonderfully done and really made for such an engaging read. And UNFFFF that smut at the end was ridiculously hot!

hd_erised 2020
Summary: It’s opening night at Draco Malfoy’s Muggle-friendly art gallery. Harry Potter is the Auror assigned to make sure the Statute of Secrecy stays firmly intact. When the party’s over and the all-too-encompassing security system kicks in, they might find reasons to look at things from new perspectives—but first they’ll have to make it through a night alone together.
Oh my goodness, this was SO freaking good!! Both Harry and Draco's voices were so spot-on, and Draco in particular captured my heart. I really enjoyed all of the rumination and conversation around ~redemption~ and how to make amends and what that looks like, and I love that Draco grapples with it. The way things build and unfold was just so fantastic, and there were so many lines and descriptions throughout that left me breathless. When Harry finally *does* come around, it's so very satisfying, and UNFFFF the smut that follows definitely scratched all itches! The ending was perfection and I honestly I just really, really loved this fic!

Title: What Dreams May Come
Author:

hd_erised 2020
Summary: If Harry had to get called into work on his day off, at least he was able to get Malfoy called in too.
OH MY GOD, this was A M A Z I N G. I am LIVING for all the tropes the author managed to  cram into this thing, and the dynamic between Harry and Draco was just fabulous. All of the (mutual!) pining was delicious, and Harry's voice here was so delightful and pitch-perfect. The smut just killed me dead, and the plot was so interesting and engaging and perfectly paced! Great read with a fabulous ending!

hd_erised 2020
Summary: When Hermione sets up a diplomatic mission to begin repairing the damage British colonisation did to Indian magical communities Harry isn’t going to pass on the opportunity to visit and help his family’s home country. Maybe he should have asked a few more questions about the personnel she had recruited for it before signing on because Malfoy surely has an ulterior motive to be there.
Or
Harry goes back to India to rediscover some of his lost roots. He meets Malfoy there. Hijinks ensue!
This is absolutely brilliant, and everything I could have wanted from a desi Harry fic!! I love that the author was so thoughtful and intentional with Harry's heritage, really showing how being desi, and being disconnected from those roots, really impacted his life. His anger over the destruction of British colonialism feels so true to character, and the parallels with Voldemort, and his feelings towards Draco at the start, similarly feel so rich and authentic. The slow build between him and Harry was so incredibly satisfying, especially when set against this love letter to India. And the ending, with the sweetness and the sexy smut, was just perfection!

Title: Not From Kindred Stock
Author:

hd_erised 2020
Summary:"Potter!" Draco calls again, but this time he pauses at the sound of his voice. "Potter?"
Something is very wrong.
Because now that he's gained a little of his equilibrium back and the room is no longer spinning, Draco has a sinking realisation that his voice doesn't sound rough or gravelly, but rather different. Different like his vision and the feel of his body around his bones and the bloody goddammned fucking clothes on his—shagging Salazar, God fuck, this isn't his body.
Ahhh, this was so much fun!! Bodyswap is one of those tropes that I'm weirdly very particular about, but I super enjoyed the way the author went about it here! Draco in particular, and the life he'd managed to carve out for himself post-war, was wonderful, as was Astoria and their relationship! So great to see Harry and Draco be forced together by the body swap and watch them come to a greater understanding of one another!

hd_erised 2020
Summary:Draco never thought he’d end up as the sole guardian of a troubled teenage girl. Harry never thought he’d end up a werewolf. Being twenty-two is hard.
Oh man, this fic was certainly a rollercoaster!! Lots of excellent feels, and though there’s definitely some heavy content (please mind the tags if domestic violence/mentions of child sexual abuse/dealing with the aftermath of either is trigger for you!) the author handles the issues in a really respectful and authentic way. Draco here in particular was really brilliantly rendered, and the slow build of feelings between him and Harry as Harry realises he’s been making some inaccurate assumptions was really lovely to see. This fic flew by and the ending was wonderfully satisfying.

Title: Heaven Through a Window
Author:

hd_erised 2020
Summary: Life is going swimmingly for Draco: he’s a respected Healer, his son is excellent in every way, and none of his patients have died recently.

Then he gets landed with Perfect Potter and his hordes of stupid friends. It’s intolerable. But the more time Draco spends with the lonely boy from Surrey, the more he believes there might be a hero within us all.
Oh man, I really loved reading this! Memory loss is one of those tropes I'm really particular about, and I enjoyed that Draco and Harry weren't in an established relationship when Harry lost his memory as is so often the case with this trope. The Draco POV here was absolutely wonderful, and the slow burn between him and Harry was so fantastic to read. The ending was perfect, and UNFFFF the smut was so hot!!

hd_erised 2020
Summary: This is not a story about Harry renovating Grimmauld Place.
This is a story about coffee shops and brewpubs, about Ginny and Luna on a farm with creatures, about magical Oregon, coastal road trips, flying, friendship, and Draco Malfoy's lean arms.
Oh goodness, this was just fantastic!! I'm not generally drawn to coffee shop AUs but this one pulled me in from the start, and I really enjoyed the Portland setting and the theme of fresh starts. The characterizations here were so brilliant and I was totally sold on this world and the choices the characters made. I adored Harry's voice throughout and the build with Draco was wonderfully done--plus, UNFF we are SPOILED with the smut in this fic! The ending was perfection, and I really enjoyed the whole ride this fic took me on! This entry was originally posted here on Dreamwidth. Please comment there using OpenID
Tags: fandom: harry potter, fest: hd_erised, pairing type: slash, pairing: draco/harry, rec: fic
Subscribe
Comments for this post were disabled by the author